Start building your crypto portfolio and get 40 €

Use promo code “FREE40” to register

*valid on your first purchase above 400 €

Kriptomat is the fastest, easiest way to start your crypto portfolio. And for a limited time, you can earn a welcome bonus: 40 € worth of Bitcoin .

Make a first purchase of 400 € or more of any cryptocurrency. 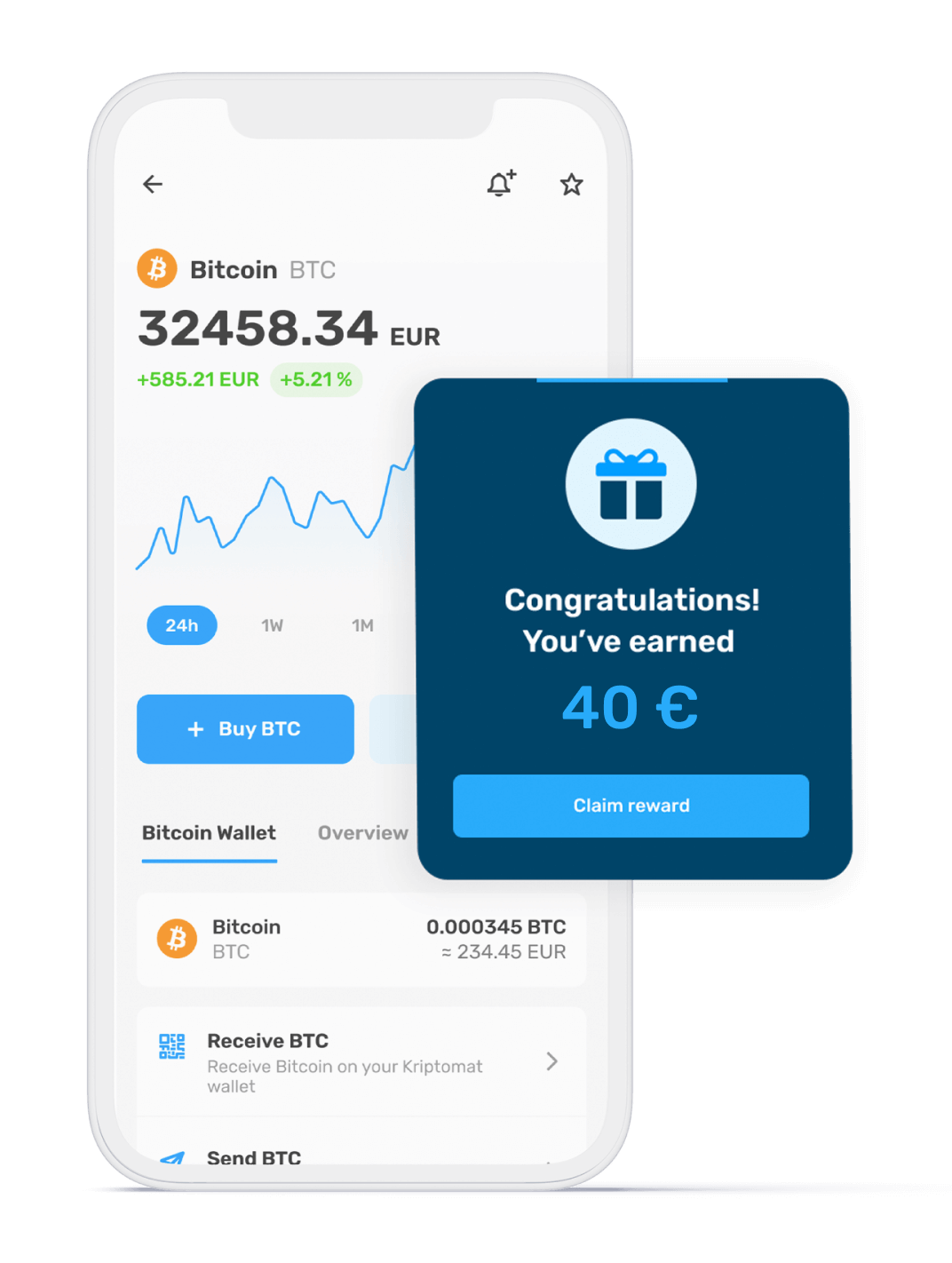 1. KRIPTOMAT OÜ reserves the right, in its sole discretion, to cancel, terminate, modify or suspend the promotional campaign should a virus, bug, non-authorized human intervention, fraud, or other cause beyond KRIPTOMAT OÜ’s control corrupt or affect the administration, security, fairness, or proper conduct of the campaign. In such case, KRIPTOMAT OÜ may select the winners from all eligible entries received prior to and/or after (if appropriate) the action taken by KRIPTOMAT OÜ. KRIPTOMAT OÜ reserves the right, in its sole discretion, to disqualify any individual who tampers or attempts to tamper with the entry process or the operation of the campaign or website or who violates these terms & conditions. KRIPTOMAT OÜ has the right, in its sole discretion, to maintain the integrity of the campaign and to void votes for any reason, including, but not limited to: multiple entries from the same user from different IP addresses; multiple entries from the same computer in excess of that allowed by campaign rules; or the use of bots, macros, scripts, or other technical means for entering. Any attempt by an entrant to deliberately damage any website or undermine the legitimate operation of the campaign may be a violation of criminal and civil laws. Should such attempt be made, KRIPTOMAT OÜ reserves the right to seek damages to the fullest extent permitted by law.

2. Limitation of liability: By entering, you agree to release and hold harmless KRIPTOMAT OÜ and its subsidiaries, affiliates, advertising and promotion agencies, partners, representatives, agents, successors, assigns, employees, officers, and directors from any liability, illness, injury, death, loss, litigation, claim, or damage that may occur, directly or indirectly, whether caused by negligence or not, from: (i) such entrant’s participation in the campaign and/or acceptance, possession, use, or misuse of any prize or any portion thereof; (ii) technical failures of any kind, including but not limited to the malfunction of any computer, cable, network, hardware, or software, or other mechanical equipment; (iii) the unavailability or inaccessibility of any transmissions, telephone, or Internet service; (iv) unauthorized human intervention in any part of the entry process or the campaign; (v) electronic or human error in the administration of the campaign or the processing of entries.

3. Disputes: THIS CAMPAIGN IS GOVERNED BY THE LAWS OF ESTONIA WITHOUT RESPECT TO CONFLICT OF LAW DOCTRINES. As a condition of participating in this campaign, participant agrees that any and all disputes that cannot be resolved between the parties, and causes of action arising out of or connected with this campaign, shall be resolved individually, without resort to any form of class action, exclusively before a court located in Estonia having jurisdiction. Further, in any such dispute, under no circumstances shall participant be permitted to obtain awards for, and hereby waives all rights to, punitive, incidental, or consequential damages, including reasonable attorney’s fees, other than participant’s actual out-of-pocket expenses (i.e. costs associated with entering this campaign). Participant further waives all rights to have damages multiplied or increased.