If you’re a gamer, developer or simply just interested in the new use-cases for blockchain and cryptocurrencies, then we have some very interesting news for you!

We believe that Enjin is one of the most innovative players in the gaming-token space, so we’re proud to announce that Kriptomat is adding the Enjin Coin to our list of cryptocurrencies.

Enjin or ENJ is an ERC20 token that gives gaming communities, content creators, and publishers, an easy solution for implementing virtual goods and real value into their gameplay and various communities.

Read on to get a better understanding of what all of this means for you and how you can buy ENJ coin.

Unlike a lot of other crypto companies which sprung up like mushrooms after rain, — rain, in this case, being the ICO craze of the last couple of years — Enjin is a company with a decade of experience under its belt. It was founded in 2009 and is based in Singapore. Their products include Enjin Network, Enjin Wallet, EnjinX, Efinity, and Enjin Coin.

The online economy is currently being strangled by greedy monetization models (we’re looking at you, microtransactions).

Besides, in the current state of affairs, gamers don’t truly own the virtual items they pay for. They simply use them temporarily and forget about them once they have finished each game. The value of those items is solely based around how they can be used inside one particular game, therefore there are restrictions on how much revenue game developers can earn from this monetization method.

Enjin is aiming to revolutionize this model.

Watch this official explanation video to get a basic understanding of Enjin Coin.

Enjin proposes a solution that utilizes the blockchain to provide players with sovereignty over their items, meaning they can own them forever, trade them freely and secure them within their blockchain addresses.

When plugged into games, blockchain assets that are created by using Enjin’s development platform can function exactly the same as all other in-game items. The magic happens once you leave the game.

Players will be able to store their items securely in the Enjin Smart Wallet, use them on compatible devices and platforms, trade them freely on third-party marketplaces, and even use them in multiple games. 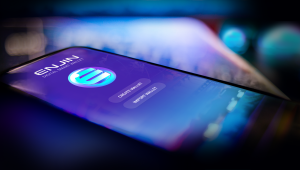 Developers can open up a new stream of revenue by placing nominal transaction fees on all item transfers and peer-to-peer trades. They can also regulate secondary markets approving specific trading methods, and disallowing all else. These solutions will have a significant impact on developers bottom line while providing a community experience beyond what has been possible up until now.

Players can redeem the Enjin Coin (ENJ) by “melting” down their in-game items. They are also able to trade items—represented by ERC-1155 tokens—via peer-to-peer third-party platforms.

The Ethereum platform and Smart contracts have opened a new world for innovation. We’ve covered this in one of our previous articles, so let’s just surmise by saying that Smart contracts are self-executing automated contracts, with specific instructions written in their code. These instructions get executed when certain conditions are met.

Various gaming tokens have been around for many years, but the blockchain technology and related standards had to mature a bit in order to accommodate some of the special needs of gaming.

You see, the problem with the ERC-20 token standard is that it requires a separate contract to be deployed for each fungible token (we’ll get to the concept of fungibility in a moment). This is very problematic when it comes to gaming where one single game can have thousands of items. I think we’ll agree that deploying a separate contract to the blockchain for each and every item is useless.

Enjin solves this problem by introducing the ERC-1155 standard, the brainchild of Witek Radomski, Co-Founder and CTO of Enjin. 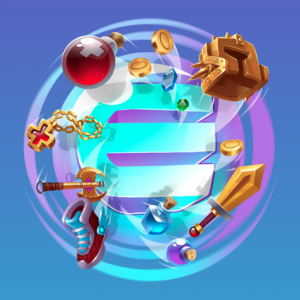 A fungible token can be replaced by something identical.

For example, imagine that I lend you a euro coin. You later return the euro and I wouldn’t care if you didn’t return the exact same coin that I gave you. As long as I receive the same euro amount as I gave you. This is the case with regular crypto coins and ERC-20 tokens. If I send you 1 ETH and receive 1 ETH in return, I wouldn’t care that it isn’t the same token.

When something is non-fungible, it is irreplaceable and contains unique information.

Collectible items are one example of non-fungible items. You would probably be upset if you lent your precious Pokemon card to a friend and wouldn’t get the same item back. Other examples include airplane tickets, unique video game items etc. In simple terms, the ERC-1155 standard allows the trading of unique items. This functionality saves on transaction costs and it removes the need to approve individual tokens separately.

In other words, ERC-1155 allows developers to create a single contract for an endless amount of tokens. This is drastically more efficient than previous standards.

Enjin is most commonly being used for building community and clan websites. The modules built on the Enjin platform allow users to create a highly customized website specifically for their communities.

In conclusion, Enjin solves a lot of traditional issues with trading virtual goods.

Adoption is coming, and just recently, Touchhour Inc made an announcement about their adoption of Enjin’s platform for their upcoming game 9Lives Arena. The game will use the ERC-1155 token standard and enable players to store in-game characters as cryptocurrencies within their secure blockchain addresses.

How to buy Enjin with a bank deposit?

Here is a detailed step-by-step guide of how you can easily buy the ENJ token with euro right here on Kriptomat.

At the time of writing this article (11 September 2018), the ENJ token is being traded at about 0,03 EUR (0,038 USD). The all-time high price of 0,49 USD was 8 months ago when all cryptocurrencies–led by bitcoin–had an incredible rally. We’re currently in a bear market, which means that prices are stagnating, but this is just another part of market cycles.

Enjin has a rising number of supporters and a strong community that is backing the project. The current price shouldn’t be strongly linked with the developments of the Enjin platform. The team is working hard to deliver a stable platform, and they’re doing a great job.