Thousands of everyday people are acting to protect their savings while building large nest eggs by accumulating cryptocurrency. They are aiming to protect themselves against unemployment, random pandemics, and the advancement of new technologies like automation and artificial intelligence.

This speculative investment has given traditional investors a greater return than gold, real estate, or the market’s best stocks. Entrepreneurs like Twitter founder Jack Dorsey and billionaire hedge fund manager Paul Tudor Jones say crypto will be the basis of a revolution in the way people acquire wealth.

Business Was Great! And Then COVID-19 Happened

Tom had a small business, an old-fashioned tavern with a very loyal clientele. He employed four people — two of them students working as bartenders and two full-time in the kitchen.

On weekends, he cursed how much work he had, but inside, he was smiling because of the money coming in.

That was November 2019, and little did he know what was about to happen.

COVID-19 and the lockdown that followed caught Tom and millions of other entrepreneurs off-guard. Tom’s little tavern went bankrupt in March of 2020. Tom and his four loyal employees lost their jobs.

In the midst of this catastrophe, Tom started looking for ways to grow and protect his remaining savings.

He invested in Bitcoin. And a year later, his nest egg had grown by 300%.

Each time Bitcoin price has crashed, it has recovered and gone higher than anyone would have imagined: 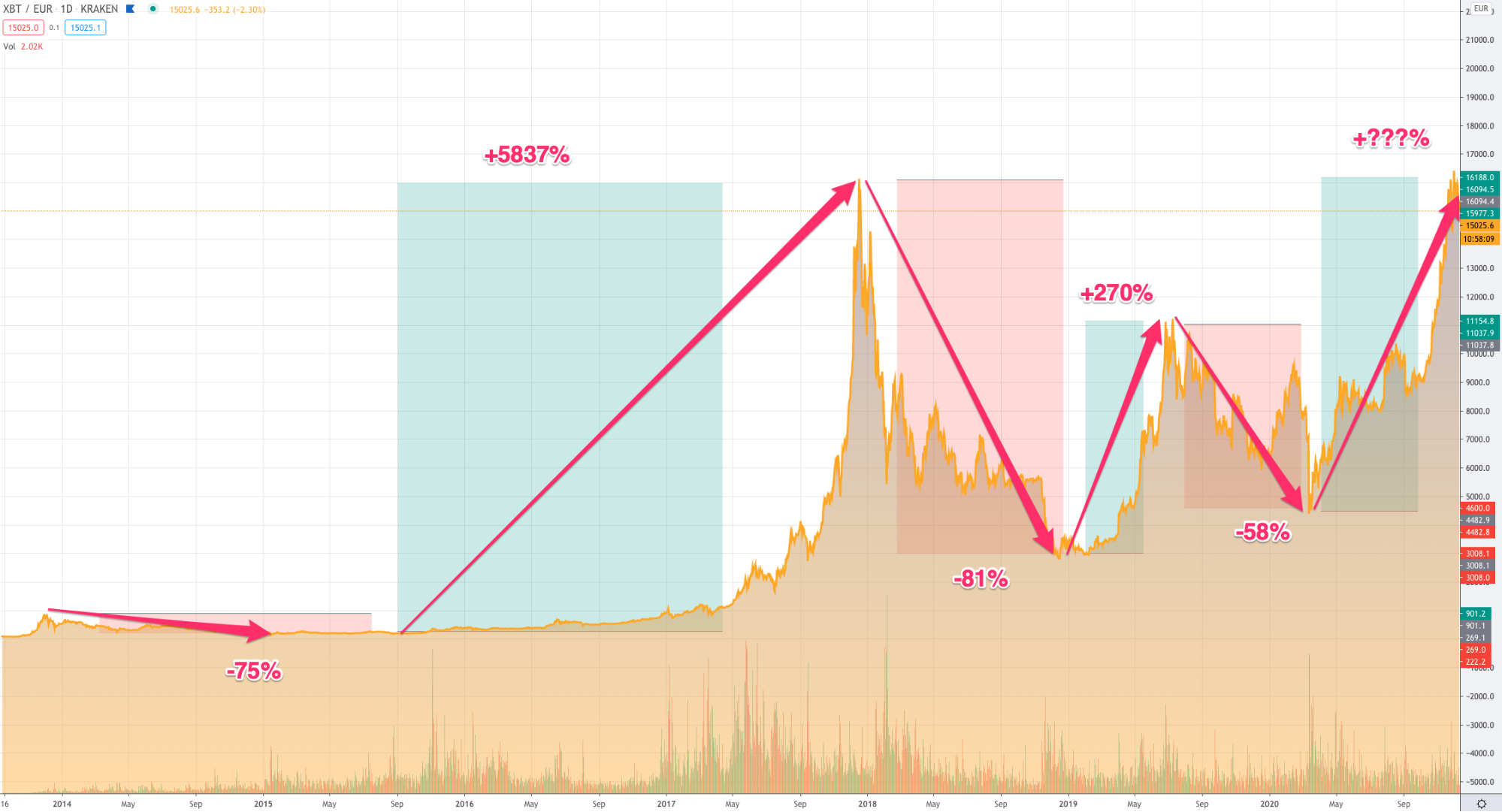 Then it collapsed again.

And on November 30, 2020, Bitcoin surpassed that previous price once again.

Bitcoin has seen reverses since then, shedding half its value very quickly. But it’s still delivering great returns to long-term investors. That’s why hedge fund billionaires and tech entrepreneurs are investing millions.

Billionaire investor Paul Tudor Jones has said that Bitcoin’s market cap will be worth 25 times more than it is now in the coming years.

A Citibank senior analyst predicted a price of $320,000 per Bitcoin in a report for institutional clients.

These are the kinds of people who a couple of years ago were saying that Bitcoin was a scam. Now they’re investing because of the amazing upside and the traction that Bitcoin has consistently shown in the marketplace.

Everyday people are using crypto more and more. In countries like Canada, Australia, and Spain, the number of people using Bitcoin doubled in less than 12 months.

The number of people buying Bitcoin via the Cash App developed by Square (whose founder, Jack Dorsey, also created Twitter) is growing so quickly that the company invested more than $50 million dollars in Bitcoin.

An increasing number of analysts say Bitcoin’s best days are yet to come.

What Returns Can You Expect?

We don’t make predictions or give advice on crypto investing, especially on a single currency. But one thing is for sure. All these billionaire investors and Hollywood stars and tech entrepreneurs are investing millions in crypto because the adoption is growing quickly and they believe the upside is huge.

There’s nothing like knowing that your savings are growing and you are taking action to protect yourself against unemployment, pandemics, automation and AI, or a sudden emergency.

That’s why everyday people are creating portfolios and building wealth with crypto.

Ready to join them? Create a Kriptomat account for free and start buying Bitcoin and other cryptocurrencies within minutes.

Crypto Basics Finance & Investing News & Trends
Related articles
Bitcoin Wallets: Choose the Best for Ease Of Use and Crypto Security
How Cryptocurrency Mining Works
How to Earn Cryptocurrency as a Gamer, Gig Worker, or Entrepreneur
How To Invest in Crypto for Long-Term Gain
Trading Crypto for Short-Term Profit